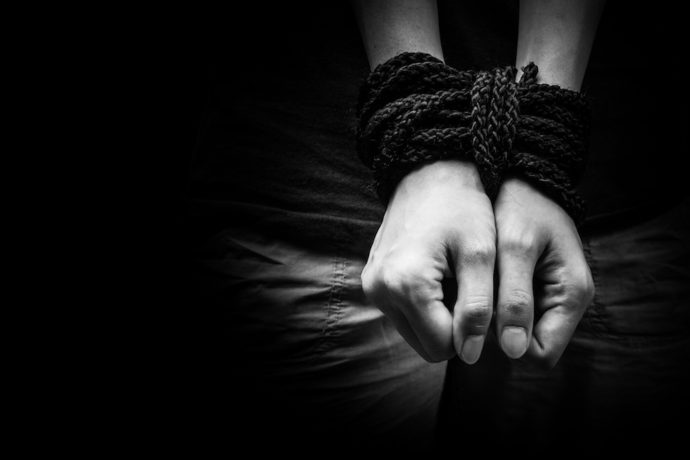 Fr. Joseph Laramie, SJ is a campus minister at Saint Louis University, his alma mater. Previously, he taught at Regis Jesuit High School in Colorado and Rockhurst High School in Kansas City. His book, “Abide in the Heart of Christ: a 10-day Personal Retreat with St. Ignatius” will be printed in October 2019 by Ave Maria Press.

Which is better: a paper cup that you use once, or a metal mug that you drink from again and again? The decision is clear. Reusable goods are better for the environment and cheaper in the long run.

What about people? Is it better to use someone once and then toss them aside, or to use them again and again? What?! Humans should not be treated like objects. We rightly feel confused and horrified by this example. But it happens everyday. There is a name for this modern crime: human trafficking.

People continue to be bought and sold in the world today. Prostitution and pornography are among the chief culprits. Or perhaps a young man is promised a big paycheck and citizenship in a wealthy country; all he must do is work in landscaping for a few months. Years later, he continues his backbreaking work–with just a few bucks in cash and a steady stream of lies and threats. He is trapped in a cycle of deception and oppression.

Pope Francis uses the term “throw away” culture to describe this dark side of our modern economy. He writes, “Today everything comes under the laws of competition and the survival of the fittest, where the powerful feed upon the powerless…Human beings are themselves considered consumer goods to be used and then discarded. We have created a ‘throw away’ culture which is now spreading” (Evangelii Gaudium, 53).

In stark contrast, we see the example of Jesus. He stands up for the woman trapped in adultery and sets her free. Jesus shows us that we are not objects. We are beloved sons and daughters of our Heavenly Father.