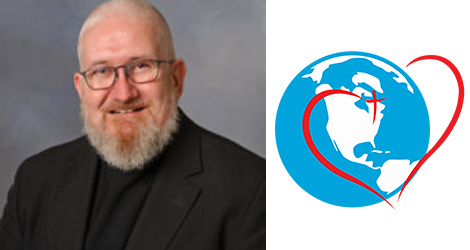 Today, Tuesday was the first full day of meetings in Rome for the Continental Coordinators of the Pope’s Worldwide Prayer Network and Eucharistic Youth Movement. The gathering is being held at the Jesuit Curia near St. Peter’s Basilica, the home of the Society of Jesus, to whom the Holy Father has entrusted the Pope’s Worldwide Prayer Network (Apostleship of Prayer).

Representatives met in prayer and reflection to consider the promptings of the Holy Spirit as the PWPN/EYM continue the recreation of the Apostleship of Prayer which began in 2014. The Superior General of the Society of Jesus, Fr. General Arturo Sosa, SJ (Spain) addressed the congregation, as well as his General Secretary, Fr. Antoine Kerhuel, SJ (France). Fr. General shared his thoughts on the recent Jesuit General Congregation’s reflection on the state of the world today and the Ignatian/Jesuit communities response to the challenges identified therein.

As Continental Coordinator for North America, Fr. Blazek is attending along with Fr. Binh Nguyen, SVD, who is the General Chaplain of the Eucharistic Youth Movement here in the USA. The Coordinators for South America, Europe, Africa, East Asia, and South Asia have all been in attendance as well as Fr. Frederic Fornos SJ, International Director and his staff along with members of the International Council.

Fr. Blazek wrote from Rome to relate: “There is a real spirit of community and cooperation here, an excitement about taking the mission of PWPN/EYM forward in continuity with the Apostleship of Prayer.  While maintaining that tradition and strength, the task for the current leadership is to affect the transformation discerned over the past several years, and to bring the Apostleship into dialogue of prayer and action to address the challenges named by the Holy Father which face all of humanity these days.”