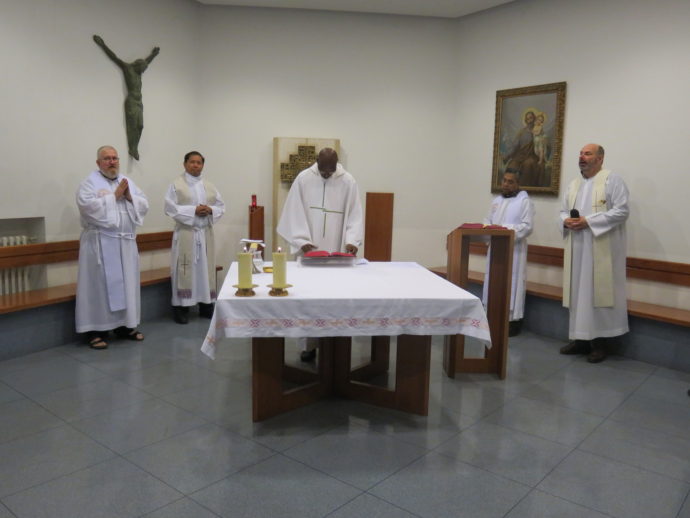 In the second day of the Continental Coordinators Meeting for the Pope’s Worldwide Prayer Network/Eucharistic Youth Movement in Rome, the emphasis was on reviewing the recreation process for the Apostleship of Prayer from 2014 to date. Fr. Frederic Fornos, SJ, International Director was appointed directly by the Holy Father Pope Francis in 2014 to accomplish this undertaking which has moved forward in 3 phases. Even before the recreation began, over 3 years were spent in fact-finding, reflection and research with multiple meetings held in international venues to discern the state and future of the Apostleship of Prayer.

Fr. Fornos related to the gathering how in 2014 “A Pathway with Jesus in Apostolic Readiness: The Apostleship of Prayer” was approved by the Holy Father and published as a framework for the recreation. In it the Holy Father characterizes his intentions as “Challenges facing all humanity” with the spirituality of the Heart of Jesus as the basis of our mission. In 2014 it became clear that the organization would benefit from a more consistent international identity and symbology. The current logo and the name change to the Pope’s Worldwide Prayer Network are the fruit of that reflection on St. Ignatius’ contemplation on the Incarnation. The globe represents the international character of our mission, and the concerns of all humanity addressed in the Holy Father’s intentions. The outline of a heart points us to the spirituality of the Heart of Jesus, our particular understanding of devotion to the Sacred Heart.

The Second Phase of the recreation addressed mechanisms to communicate the Holy Father’s intentions using the new media.” “The Pope Video and Click to Pray are the most visible products of that effort.” said Fr. Fornos. The First Friday of every month, traditionally a day of prayer honoring the Sacred Heart of Jesus, is now recognized as a World Day of Prayer for the Intentions of the Holy Father. On January 8th, 2017, Pope Francis in his Angelus Message shared: “I would like to invite you all to join the Pope’s Worldwide Prayer Network, which even through social networks, spreads the prayer intentions that I propose every month to the whole Church.”

Fr. Fornos emphasized that the recreation is not a rupture with the past traditions and history of the Apostleship of Prayer. “The AoP and the PWPN are one. With any change there can be confusion and miscommunication. The Resurrected Christ and the Crucified Christ are one. The Resurrected Jesus always shows the wounds of the Crucifixion.”

After reviewing the details of each phase in depth there was time to pray and share about questions and concerns members of the conference developed during the course of the day. This portion of the conference concluded with Mass and afterwards a dinner in the Curial dining room. The meeting of Continental Coordinators will continue through Saturday, January 27th.