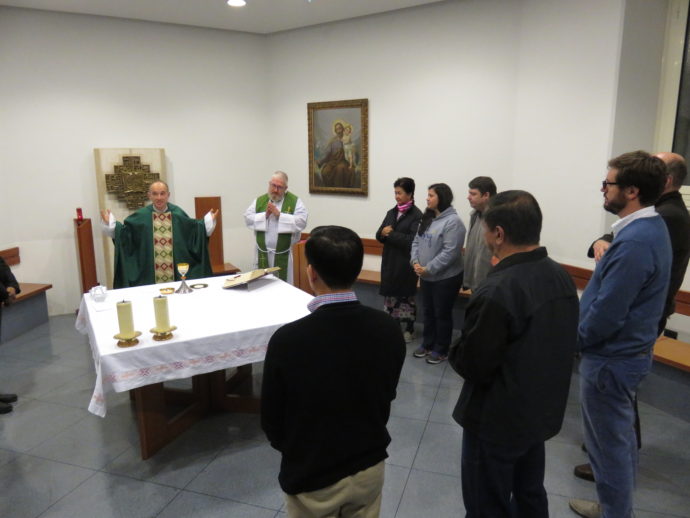 Rome—The conference of the Continental Coordinators for Pope’s Worldwide Prayer Network/Eucharistic Youth Movement (The Apostleship of Prayer) continued today at the Jesuit Curia adjoining Vatican City. The emphasis on this fourth day of conversations and presentations was on the Eucharistic Youth Movement, media and technology, and mission development. Also in attendance were Juan della Torres (Argentina), from our media consultants La Machi, and Gianluca Vignola who coordinates mission development and fundraising for the Pope’s Worldwide Prayer Network.

In the morning session, International Director Fr. Frederic Fornos, pointed out, “The basis for forming our young in the Eucharistic youth is the Offering Prayer, Eucharistic Life, and a Covenant Prayer (Evening self-Examination).”  He emphasized, “The heart of EYM is friendship with Jesus through the Gospel, Eucharist, and participation in the Mission of the Church. The Eucharist is at the center is friendship with Jesus. To have a strong relationship with the Lord through the Eucharist is central to the EYM approach.”

In the afternoon Juan Della Torre (Argentina), Director of La Machi Communications reviewed the media and technology campaigns that have been running especially since the launch of The Pope Video and the Click to Pray App in 2016. He reported, “The Pope Video presents the Popes Intentions every month worldwide in 9 languages. One marvelous indication of the world interest in this project is the more than 8,100 press articles that have been written about the TPV since its launch in 2016. Content is shared monthly with journalists, religious, related institutions, and the communications and advertising industry. The video runs with Spanish, Portuguese, English, French, Italian, and German among the largest populations viewing it.”
“The impact of The Pope Video has been massive in social networking sites. For example according to reports limited to only the Vatican websites we have had a 49.5 million Facebook reach for 2016 and 2017 worldwide, with 5.2 million in English in the same timeframe and 30 million in Spanish. There is actually no way to estimate how many times this video has been shared through all the other mechanisms viewers are using to pass it on.” The total number of Click to Pray users worldwide is over 1.3 million since its inception in 2016.
In Friday’s final session for the day, Gianluca Vignola presented an update on the financial health of PWPN/EYM from the international perspective. While each national office is financially independent, the central office in Rome has its own expenses and programing costs, as well as the opportunity to provide assistance to those national offices of PWPN having fewer resources.
Photo above:  Fr Blazek concelebrates at the French speaking Mass with Fr. Xavier Roger, SJ (France) along with other members of the conference in the Chapel of St. Joseph at the Jesuit Curia in Rome.