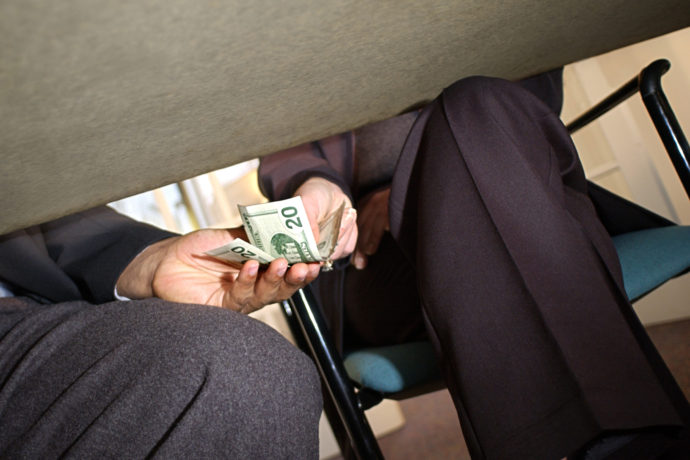 The abuse of power for personal benefit, corruption, is a problem across all human history. Bribery is often involved. One hears sadly of corrupt narcotics officers working for the mob, or of favors granted at various places of employment for a kickback, or at high levels of government for a public works contract. The Holy Father has taken a firm stand against such immoral and illegal activity, asking us to pray that those tempted to corruption may be delivered from illicit enticements.

This is also a very Ignatian intention: the founder of the Jesuits knew that riches, power and pride were all closely interrelated. The enemy of our human nature leads us to think our gifts and abilities are our own or that having some power might bring us material, social or spiritual wealth. Sadly, in this progression many of us fall prey to the sin of pride, thinking ourselves better than others, or even placing our will above the Lord’s in fashions small and large.

The struggle against corruption is a priority for Pope Francis. On a visit to the Italian city of Cesena last October he characterized corruption as the “termite of politics” and contrary to the common good. In that pastoral visitation listeners applauded his challenge to reject “even the most minimal form of corruption.”

Later that same year the Holy Father called corruption a “smog” that “pollutes” society. Pope Francis invites Catholics to be “crafty,” having a “healthy lack of trust” for those promising easy riches. Such craftiness, he enjoined, calls for careful self-examination in the face of temptation, and a healthy prayer life.

Have I been tempted by the lure of riches, be they material, financial or social? Am I in business relationships or friendships with individuals who are abusing power and influence? How might I challenge them, or extricate myself from these webs?

Ephesians 4:20-24 That is not how you learned Christ…as truth is in Jesus, that you should put away the old self of your former way of life, corrupted through deceitful desires, and be renewed in the spirit of your mind and put on the new self, created in God’s way in righteousness and holiness of truth.