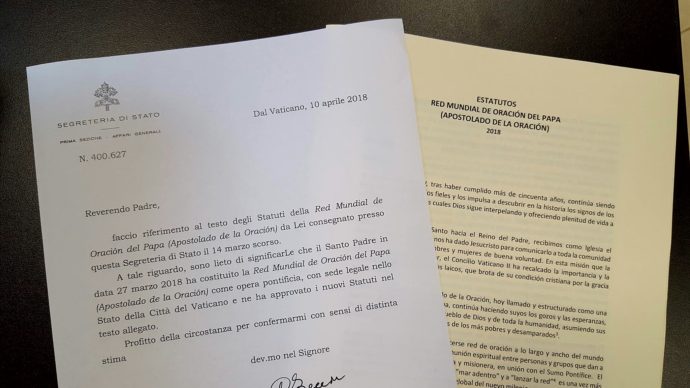 On March 27, 2018 the Holy Father confirmed the status of the Pope’s Worldwide Prayer Network (Apostleship of Prayer) as a work of the Holy See. PWPN (AoP) is constituted as a pontifical work at the service of the Universal Church, with its legal headquarters located in the Vatican City State. The new statutes make modifications pertinent to the “recreation” of the AoP which began formally in 2014.

The PWPN (AoP) was previously directed by the Superior General of the Society of Jesus, who appointed an International Director to run it on his behalf. Under the new statutes our International Director Fr. Frederic Fornos, SJ, and his successors are appointed directly by the Holy Father. This arrangement makes clear that, while the prayer network is entrusted to the Society of Jesus (the Jesuits), it is truly at the service of the Universal Church.

As a work of the Holy See, National Directors appointed by Fr. Fornos are approved by the local National Bishops Conference, in the case of the United States, the USCCB. “These new statutes clarify our role and standing in the broader Catholic Church.” said Fr. Blazek, the US-Canada Regional Director. “While the grass roots membership may notice little change, with the new legislation our leadership gains greater clarity as to our relationship with other senior leaders in the Catholic community.”