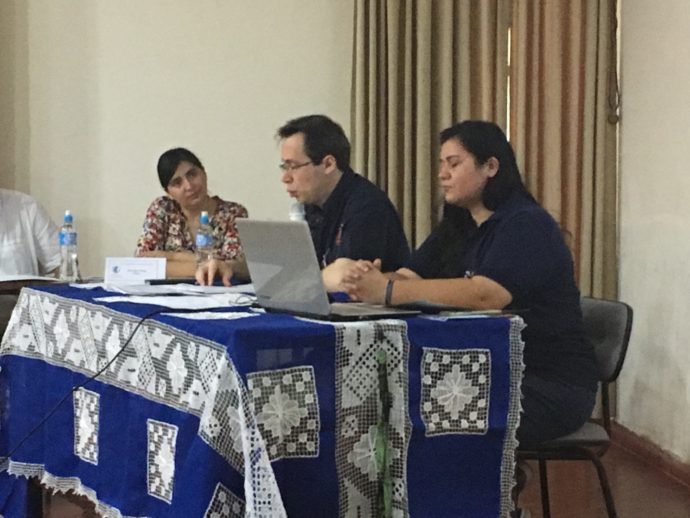 On this second day of our 9th Pope’s Worldwide Prayer Network (PWPN) Latin American Conference, International Director Fr. Frederic Fornos reviewed the worldwide stages of the recreation of the Apostleship of Prayer as the PWPN. PWPN, and its youth arm the EYM, are a pontifical work at the service of the Universal Church, entrusted to the Jesuits, the Society of Jesus. Fr. Fornos emphasized that the recreation has “a global character.” In March, a leadership meeting addressing our recreation and works for all of Africa was held in Kenya, with representatives from 24 nations attending.

Fr. Fornos expressed his gratitude to Sr. Lourdes Vargez for her service as the international assistant for the EYM, and announced that the search continues for a suitable lay candidate to serve in Rome in this global undertaking. Fr. Fornos reminded the gathering that some 13 -14 international conferences were undertaken to discern and discus the recreation before the process was formally implemented in 2014.

When asked why the number of intentions was simplified from two to one each month, Fr. Fornos explained: “With the recreation, in consultation with and with the direct approval of the Holy Father, the number of intentions was simplified to 12 a year to allow for a deeper reflection allowing those praying with the Holy Father to concentrate more fully each month on one challenge facing humanity.” This was explained in the document for the re-creation of the Apostleship of Prayer approved by Pope Francis in 2014.

In 2015 the Superior General of the Society of Jesus, Fr. Adolfo Nicolas, announced to all the Jesuits in the world about the recreation of the Apostleship of Prayer and asked to support this recreation. He related that the General of the Society would no longer be the Director of the PWPN, future directors would appointed directly by the Holy Father himself. In July 2016, Pope Francis, in a letter to bishops, related that future directors of PWPN would be appointed directly by the Holy Father himself.

In 2015 the new name and logo were implemented to clarify our papal identity and worldwide mission. The logo and name are in continuity with our history and mission, as well as with a theology and evangelical approach suited to the new evangelization and the circumstances of the Church in the modern day.

It was recalled that in 1986 St. John Paul II confirmed for the Society of Jesus its mission of sharing devotion to the Sacred Heart of Jesus. “Thus,” explained Fr Fornos,” our logo is a reflection on the Incarnation taken from the Spiritual Exercises of St. Ignatius. The heart of Christ embraces the world, and turns our thought, prayer and action to the challenges facing all humanity in the world.”

The second step of the recreation confirmed the first Friday of each month as special day of prayer for the intentions of the Holy Father. The Pope Video (TPV), produced by PWPN for the Holy Father and with his direct participation, is his official announcement and explanation of his monthly intention. It is impossible to truly estimate how many views of the Pope Video have taken place. We have documented over 54 million views in our own networks. Fr. Blazek is the English language consultant for TPV content in service of the Universal Church.

‘In March 2016,” he continued, “we launched the Official Prayer Platform of the Holy Father, Click to Pray (CTP).” Since March 2018 we have more than 1 million people using Click To Pray. Fr Blazek and his team have the responsibility for producing and coordinating CTP content in English for the Universal Church. The app is available in 7 languages with Portuguese, Spanish, Italian, English and French representing the core language groups.

In July 2016 Fr. Frederic Fornos was appointed directly by the Holy Father to lead the Pope’s Worldwide Prayer Network. This year the EYM published its international manual, as a resource for national directors across the world. On the 27th of March this year, the PWPN international statutes were approved by the Holy Father, confirming our status “as a pontifical work, with its headquarters located in the Vatican City-State.” This news was related to the Universal Society of Jesus by Fr. General Arturo Sosa in a letter to all Jesuit major superiors this past May.

The remainder of the day was spent discussing the spirituality of the Sacred Heart of Jesus as a spirituality for the mission, and in receiving updates from the various national offices.