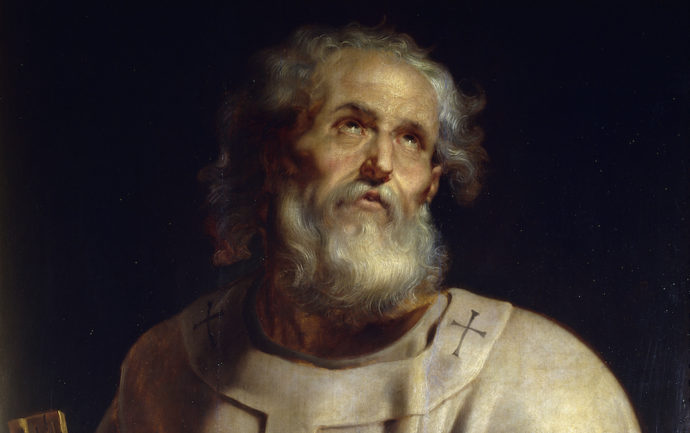 Throughout the Gospels Peter is constantly with Jesus, following in his footsteps and learning the art of prayer from God himself. When on his own Peter fails miserably, denying Christ three times and distancing himself from the crucifixion scene.

However, after Jesus ascends into Heaven Peter is renewed by the Holy Spirit and teaches his own disciples how to pray.

For example, after the day of Pentecost we see the apostles remaining faithful to a daily schedule of prayer: “Now Peter and John were going up to the temple at the hour of prayer, the ninth hour” (Acts 3:1). Later on in Acts we see again how Peter, even while traveling, remains faithful to a prayer schedule: “The next day, as they were on their journey and coming near the city, Peter went up on the housetop to pray, about the sixth hour” (Acts 10:9).

Historically Jews prayed at fixed intervals throughout the day. King David, who is believed to have wrote the Psalms, proclaims,

“Evening and morning and at noon I utter my complaint and moan, and he will hear my voice.” (Psalm 55:17)

Even the prophet Daniel is shown to have a specific schedule of prayer,

“When Daniel knew that the document had been signed, he went to his house where he had windows in his upper chamber open toward Jerusalem; and he got down upon his knees three times a day and prayed and gave thanks before his God, as he had done previously.” (Daniel 6:10).

The Jewish people began a tradition of praying three times a day: morning, afternoon and evening. The early Christians followed this rhythm of prayer, which would eventually be developed into the “Liturgy of the Hours” or “Divine Office” centuries later.

One way to pray like St. Peter is to stop for three moments of prayer during the day: morning, afternoon and evening and converse with a God who is rich in mercy and boundless in love.

This is the exact daily rhythm of prayer that the Pope’s Worldwide Prayer Network’s (Apostleship of Prayer) has adopted with prayers for the morning, afternoon and evening. These three moments of prayer are great ways to punctuate your day in prayer and are available on the Click To Pray App (or on the website: www.clicktopray.org).

The tradition is one steeped in history and rooted in the apostolic faith of the first followers of Jesus.