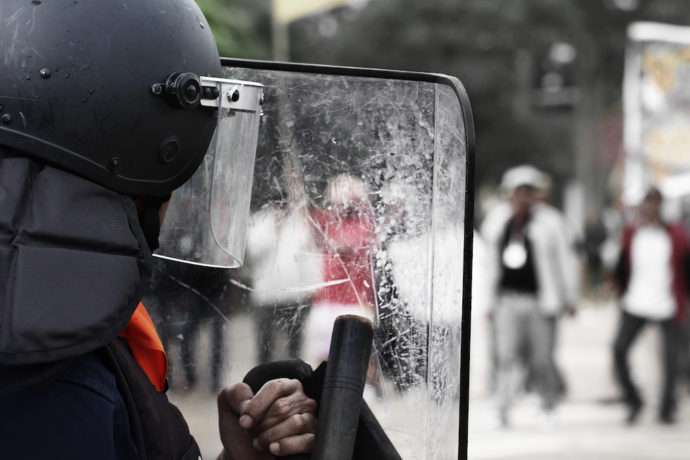 This month’s reflection is given by Deacon Ted Penton. Born and raised in Ottawa, Canada, Ted Penton, SJ first met the Society of Jesus when he served in the Jesuit Volunteer Corps, working at Legal Aid of North Carolina. He went on to become a lawyer, and after working two years at the Department of Justice, entered the Jesuits. Ted currently serves as the Secretary of the Office of Justice and Ecology of the Jesuit Conference of Canada and the United States, and will be ordained a priest in May 2019.

We live in a world of much violence—wars around the world, in our communities, and even in our homes. Seeing and experiencing this violence provokes fear and anger within us, often tempting us to respond with more violence. But this isn’t God’s answer to violence. We find God’s answer on the cross. Jesus didn’t allow Peter to defend him from an arrest by use of the sword. Nor did he call down legions of angels to save him from the Romans who tortured and executed him. Instead he submitted to death on the cross. In some mysterious way, the Father used the death and resurrection of his Son for far greater purposes than any of his followers could have imagined. As Pope Francis eloquently stated, “In the silence of the cross, the uproar of weapons ceases and the language of reconciliation, forgiveness, dialogue, and peace is spoken.”

The words we use matter, and can move us towards greater peace, or towards more conflict. Our words are an expression of who we are, just as Jesus Himself, the Word made flesh, is the incarnate expression of who the Father is. When our words are hostile and aim to put others down, we aren’t imitating Jesus, and reconciliation becomes impossible. When instead we use the language of love and peace, this enables us to enter into dialogue with others, even with those who are very different from us. Through that dialogue we begin to better understand one another, enabling us to follow Jesus in building a more peaceful world.