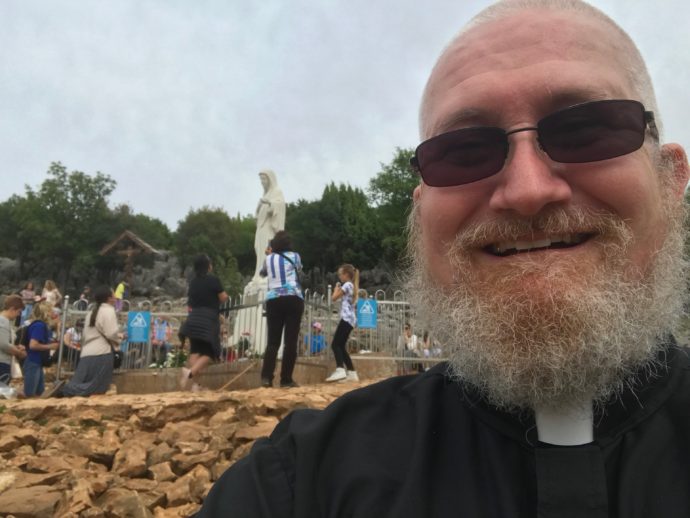 From the Desk of Fr. William Blazek, SJ
Regional Director for Canada and the United States:

Pilgrimage to Medjugorje and Rome

Last month I had the happy opportunity to make an 8 day pilgrimage and retreat in Medjugorje in Bosnia and Herzegovina. That marvelous journey will be followed closely by a trip to Rome later this month for the celebration of the 175th anniversary of the Pope’s Worldwide Prayer Network (Apostleship of Prayer). Both serve as public witness to our mission of sharing the Holy Father’s monthly prayer intentions, as well as devotion to the Sacred Heart of Jesus.

Medjugorje has for the last thirty years been at the center of spiritual renewal and of some controversy, ever since 5 young people in what was then Yugoslavia began reporting apparitions of the Blessed Virgin Mary in a small hamlet a few hours by car from Sarajevo. My retreat was made at a pensione style accommodation immediately adjacent to the home of one of those witnesses, Maria Pavlovic. It was a wonderful time of prayer, spiritual renewal, and retreat with opportunities for Daily Mass and Eucharistic Adoration in a beautiful outdoor venue looking over the hills where the apparitions have been said to take place. While I was there the Holy Father gave his official approval to pilgrimages, which news was received with great joy by the town and pilgrims there with me.

You will be happy to know that even in casual encounters there I met members of our prayer community, a woman from Panama who promised to share Click to Pray with her entire group of pilgrims, and a young man from Italy who assured me he prayed with the Holy Father for his intentions daily. Both eagerly showed me the CTP app on their phones as evidence of their commitment. Thanks be to God for the work of the Holy Spirit.

On June 28th the Pope’s Worldwide Prayer Network (Apostleship of Prayer) will celebrate the 175th anniversary of our founding with a Papal Audience followed by a Mass at the Lateran Basilica. It will be a time of celebration and prayer, with time for some practical meetings as well. Our app, Click To Pray (CTP), and the monthly Pope Video continue to reach millions across the world each month. Usually at least a quarter of those are English language visitors and members. It is exciting for us here at the Canada US Regional office to serve as the English language lead, generating all the English content for our prayers and blogs for CTP. Thank you for your support and participation in the Holy Father’s mission.

Know of my daily prayers and Masses offered on your behalf.

In the Most Sacred Heart of Jesus,

Above Image: Fr. Blazek on the “Hill of the Apparitions”