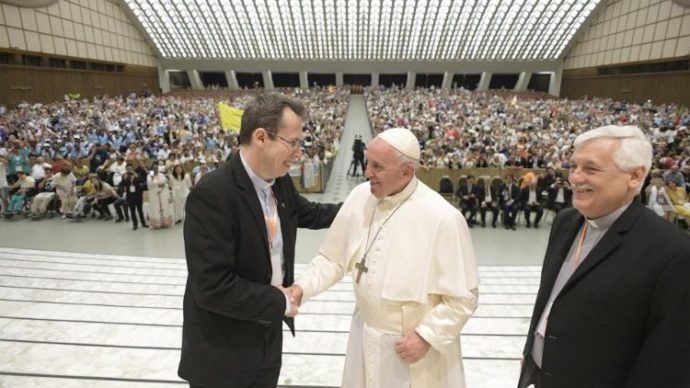 From the Vatican News Service:

The network prays and works to meet the challenges of the world identified by the Pope in his monthly intentions, while walking a spiritual path known as the “Way of the Heart.”

To mark its 175th anniversary, the Pope presided over an event in the Vatican’s Paul VI Hall on Friday, thanking all those present for their commitment to prayer.

He also heard testimonies from a number of people from around the world who are working in prayer ministry.

Another testimony came from Sister Selam from Ethiopia who works with young people in the Eucharistic Youth Movement.

Reflecting on her testimony, Pope Francis stressed the importance of helping “new generations to grow in friendship with Jesus through the intimate encounter with Him in prayer, in listening to His Word, and approaching the Eucharist as a gift of love to one’s neighbour.”

In off the cuff remarks, the Pope underlined how important it was to teach children to pray. “It pains me”, he said, “when I see children who don’t even know how to make the Sign of the Cross”. “Teach them because they go directly to the heart of Jesus.”

The Pontiff also noted that while using digital technology to proclaim God’s mercy and goodness was necessary, he urged people to pay attention, especially with regard to the Internet.  “We must avoid becoming hostages of a net that takes us in, instead of “fishing for fish”, that is, attracting souls to bring to the Lord.”

Before a moment of silent prayer, and remembering the prayer intentions for the month of July, the Pope expressed his thanks for the “precious activity” of the Worldwide Prayer Network.

He concluded by saying, “You help people to have a spiritual gaze, a gaze of faith, on the reality that surrounds them, to recognize what God Himself works in them; it is a gaze of hope.”