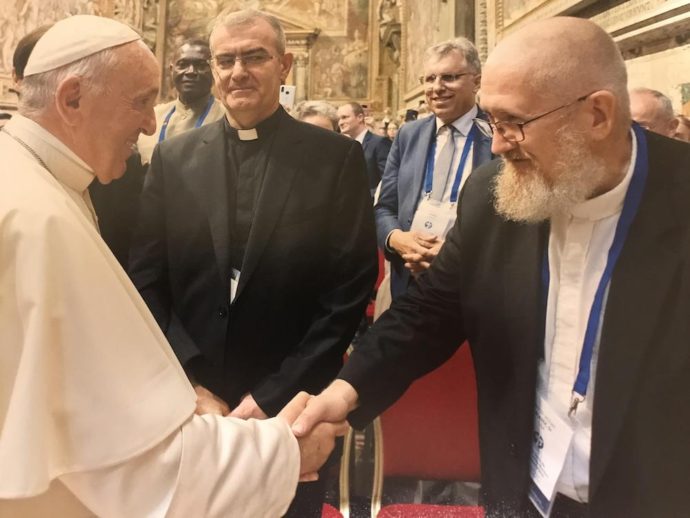 From the Desk of Fr. Blazek
Regional Director for Canada and USA

Saturday marked a great day for the entire Pope’s Worldwide Prayer Network (Apostleship of Prayer) as we continue our celebration of 175 years here in Rome. The National Directors of all the delegations present met at the Jesuit Curia to better know each other, our works on behalf of Holy Father, and the future of the organization. Of special note was to see the upcoming release of online video materials to better explain and experience “The Way of the Heart,” our particular way of sharing the Sacred Heart of Jesus.

I would like to share with all of you who have been following us and praying with us that yesterday at the Papal audience I felt a deep personal experience that we truly are an international community of individuals united across cultures, languages, and nations to pray together for the challenges facing humanity as they are expressed in the Holy Father’s Intentions. We are also united in our devotion to the Heart of Jesus across generations.

To learn more please see the press release below.

The commemoration of the 175th anniversary of the Apostleship of Prayer, today the Pope’s Worldwide Prayer Network, began early this morning in the Paul VI Hall in Vatican City, in an International Encounter with the Holy Father and thousands of people.

(June 28, Vatican City) – Around 9 a.m., the Paul VI Hall in Vatican City began to fill with guests from the five continents, united by a special occasion: the Pope’s Worldwide Prayer Network (Apostleship of Prayer), today a pontifical work, celebrates 175 years since its foundation and celebrates 10 years since it began its process of recreation, approved by Pope Francis in 2014. The Holy Father has joined the International Meeting of his Prayer Network, which is entrusted to the Society of Jesus, and while he expressed his gratitude for its work, he also reaffirmed in “the foundation of its mission: the compassion for the world.”

The inauguration of this celebration is framed between two very special liturgical feasts that fill the whole Church with joy: today is the day of the Solemnity of the Heart of Jesus – the spiritual dynamic in which the Pope’s Worldwide Prayer Network is inscribed – and tomorrow, June 29, is the joint commemoration of St. Peter and St. Paul, two great referents of the Apostleship of Prayer and of the Eucharistic Youth Movement (EYM).