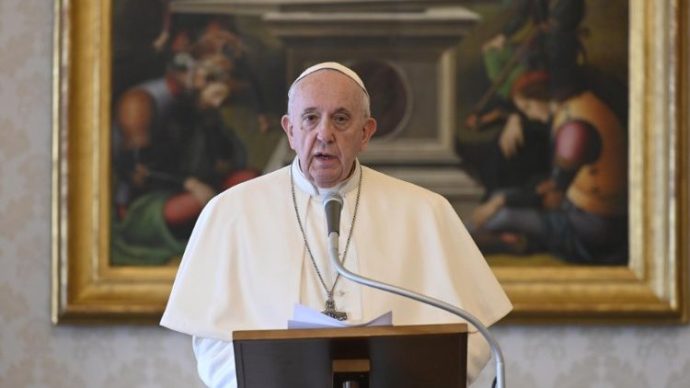 During his Sunday Angelus, Pope Francis asked all Christians to join him on Wednesday, March 25, praying the Our Father together at 12:00 (noon). Vatican News summarizes his remarks:

Speaking after the traditional recitation of the Angelus, the Holy Father called on all Christians to join together in prayer. “In these trying days, while humanity trembles due to the thread of the pandemic, I would like to propose to all Christians that together we lift our voices towards Heaven,” he said.

On Wednesday, 25 March, the feast of the Annunciation, he has invited “the Heads of the Churches and the leaders of every Christian community, together with all Christians of the various confessions, to invoke the Almighty, the omnipotent God, to recite at the same time the prayer that Jesus, our Lord, taught us” – the Our Father. “On that day on which many Christians recall the Annunciation to the Virgin Mary of the Incarnation of the Word”, Pope Francis prayed, “may the Lord listen to the united prayer of all of His disciples who are preparing themselves to celebrate the victory of the Risen Christ”.

As members of the Pope’s Worldwide Prayer Network, we have a duty to pray with the Holy Father, especially when he makes these special requests.

Let us join Pope Francis on Wednesday and do our part to raise our hearts and minds to God, asking for him to have mercy on humanity.