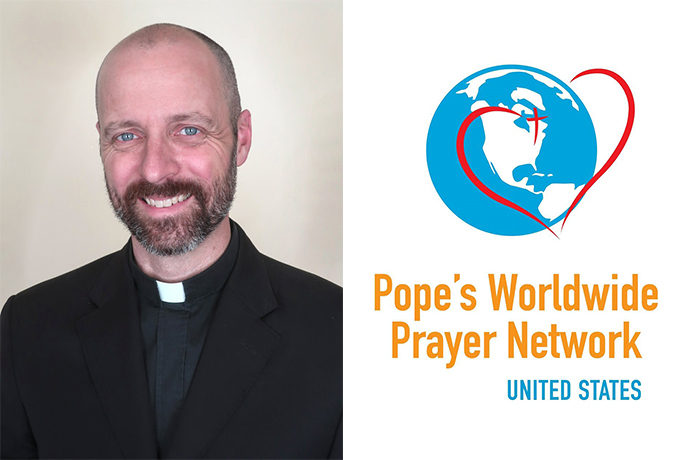 The International Director of the Pope’s Worldwide Prayer Network (The Apostleship of Prayer) Fr. Frederic Fornos, SJ yesterday announced from Vatican City that he has named Fr. Joseph Laramie, SJ the new National Director for the USA. Archbishop Jose Gomez, President of the US Conference of Catholic Bishops, approved the appointment. Fr. Laramie served most recently as a campus minister at Saint Louis University and has been a spiritual director at White House Retreat, as well as a teacher and director of pastoral ministry at Rockhurst High School in Kansas City, Missouri. He is the author of Abide in the Heart of Christ: a 10-Day Personal Retreat with St Ignatius Loyola.

The PWPN in North America provides all English language content for the Holy Father’s Click to Pray App.  Through the app it reaches hundreds of thousands of English speakers monthly. The US website hosts tens of thousands of visitors monthly, sharing “The Way of the Heart” and the “Pope Video”. The Pope Video is the Vatican platform Pope Francis entrusts to share his monthly prayer intentions, in which he draws the world’s attention to “the challenges facing humanity.” This ecclesial service, now a Pontifical Work, celebrated its 175th anniversary with a papal audience in Rome last June.  In the US, it has remained deeply committed to a direct postal mail-ministry to the incarcerated, the homebound and those without internet access.

Fr. Laramie replaces Fr. William Blazek, SJ who has been Director since 2017.  Under Fr. Blazek’s leadership the US office of PWPN (AoP) implemented the “rebranding” of this ecclesial service, implementing its recreation as envisioned by the worldwide discernments of previous years. During his tenure Fr Blazek visited Rome and Paraguay for senior leadership consultations promoting the work of PWPN across 98 countries worldwide including all of South and Central America. The principal accomplishment during his term was pivoting from a highly print-based ministry to a more fully digital ministry. Fr. Blazek will be moving on to the final phase of Jesuit formation known as tertianship after the resolution of the COVID Pandemic.