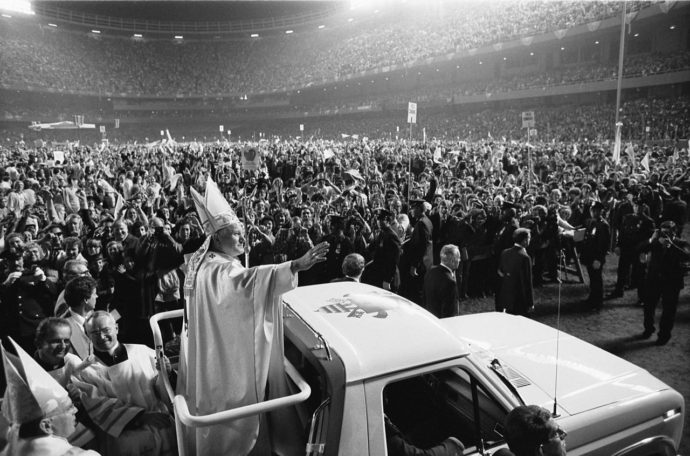 St. John Paul II was an avid supporter of The Pope’s Worldwide Prayer Network (formerly called the Apostleship of Prayer). He had a special fondness of the organization and even called it “a precious treasure from the Pope’s heart and the Heart of Christ.”

John Paul II addressed the national directors on April 13, 1985 and summarized the mission of the Pope’s Worldwide Prayer Network, explaining why he loved this network of prayer.

“The Apostleship of Prayer [now known as the Pope’s Worldwide Prayer Network] can bring a meaningful and concrete contribution to the diffusion, at all levels, of the great and consoling truth that all Christians can be intimately united to Christ the Redeemer by offering their own life to the Heart of Christ.”

The Pope’s Worldwide Prayer Network exists to point the world to Jesus and show concretely how we can be missionaries of his love in the world.

Members of this international network can accomplish this by “collaborating with Christ the Redeemer through the offering of their own lives united and lived with the Heart of Christ in total consecration to his love and in reparation for the sins of the world.”

John Paul II believed this network was vital in responding to the needs of the Church, making them known throughout the world.

“You feel particularly bound to the Vicar of Christ and pray for him every day as the mother Church of Jerusalem did for Peter (Acts 12:4); and you wish to deepen and make known to Christians the concrete problems that trouble the Universal Church, especially those of the Missions. They are the object of attentive reflection which inspires knowledgeable and responsible prayer in the People of God. The prayer that you promote does not consist in the mere recitation of a formula but must rise from the hearts of the faithful, in awareness of their own situation as creatures, but also as beloved children of God, and in the consciousness of their own participation in the priestly, prophetic and royal function of Christ, by virtue of their union with him.”

As the Pope’s Worldwide Prayer Network continues to unite in prayer and action to encounter the challenges facing the world, let us look to St. John Paul II as an intercessor and example of how to live this mission on a daily basis.