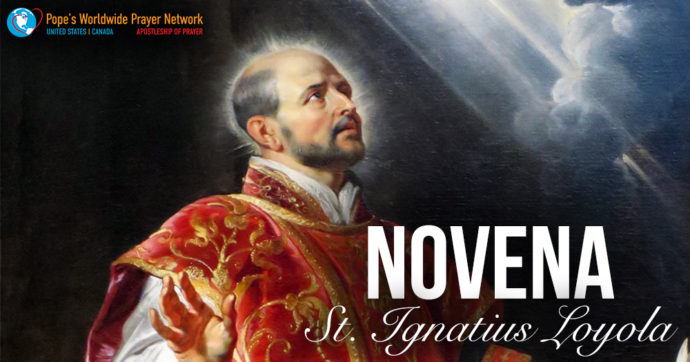 A brief introduction to St. Ignatius

St. Ignatius was born in Loyola, Spain in 1491 to a noble family. As a young man, he was described as vain and hot-tempered but also an excellent leader and skilled administrator for the royal treasurer. Attracted to the fame and glory to be won on the battlefield, he eventually became a soldier and joined the battle against the French invasion in Northern Spain. In an event that altered his life and ultimately, the life of the Church, Ignatius was struck in the leg by a cannonball in May of 1521.

At first, he had little hope of survival from this grave injury. However, he eventually began the healing process and spent a year recuperating in an upper room of the family castle. It was in this room, during this healing process, that Ignatius underwent his conversion. He read books about the lives of the saints and of Christ and was inspired by what he learned. He felt called to commit his life to imitating the saints and serving Christ.

In February of 1522, he set off from home and travelled to Eastern Spain, to the village of Manresa. He had put off his old life of riches and vanity and embraced a life of simplicity and poverty. While in Manresa, he composed what became his classic work of Christian spirituality, the Spiritual Exercises. In 1523 he travelled briefly to Jerusalem, but soon returned to Spain. There, he spent time learning Latin and then completed studies in philosophy and theology at the University of Alcalá and the University of Salamanca, with hopes of being able to teach others about the faith. During this time, he attracted the attention of followers who were drawn to his friendly spirit and spiritual insights. As a result, he was targeted by the Spanish Inquisition and imprisoned on two separate occasions for a total of 64 days.

Following these troubles, he decided to travel to the University of Paris in France, renowned at that time as the center of European higher education and thought. It was here that St. Ignatius attracted his first followers, who joined him in completing the spiritual exercises and living a life on fire for Christ and the Gospel. Among the first were St. Peter Faber and St. Francis Xavier. On August 15, 1534, Ignatius and his companions made vows of poverty, chastity, and obedience, to serve Christ and lead a ministry together. By 1537, much of the group were ordained priests, including Ignatius, and they solidified their little community as the “Society of Jesus.” The order was formally established by Pope Paul III in 1540, and Ignatius was elected as the Superior General in 1541. Ignatius spent the rest of his life organizing, forming, and leading the rapidly growing body of Jesuits, who were themselves committed to a ministry of teaching and serving others for Christ. They had as their goal “the progress of souls in Christian life and doctrine, [and the] propagation of the faith by means of the ministry of the world, the Spiritual Exercises, and works of charity.” The Jesuits were and have been successful in this goal, in large part due to the efforts of Ignatius. Ignatius died in 1556 and was canonized in 1622, at which point there were 15,000 Jesuits.

Why we celebrate his feast day

We celebrate the feast day of St. Ignatius as the Pope’s Worldwide Prayer Network (Apostleship of Prayer) not only because St. Ignatius is a wonderful saint and doctor of the Church, but because our apostleship had its humble beginnings among Jesuit novices, and our mission of service to the world and to Christ through a daily offering of self is steeped in Ignatian spirituality.

Reflect: The above phrase is the motto of the Jesuits, and it means “for the greater glory of God.” It calls to mind that even our smallest works and quiet prayers can serve the glory of God and can be given back to God in recognition that He is in all things and the source of all good. It is an invitation to live out one’s day not only in a way that is pleasing to Christ, but in a way that offers to glorify God through everyday experiences and actions. Do we have the glory of God in mind when we go through the small, mundane tasks of everyday, or do we work mindlessly to get through them as quickly as possible? Do we escape the present moment, where we are already invited to glorify God, and instead dwell obsessively with the past or anxiously on the future? With the Jesuit motto in mind, reflect on how you can offer your life to the glory of God through the beautiful and simple experiences of everyday.

Take, Lord, and receive all my liberty,
my memory, my understanding, and my entire will,
All I have and call my own.
You have given all to me.
To you, Lord, I return it.
Everything is yours;
do with it what you will.
Give me only your love and your grace,
that is enough for me.