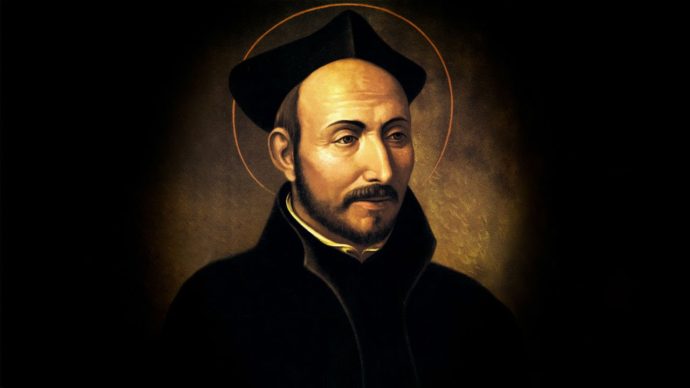 St. Ignatius Loyola wasn’t always a saint. In fact, he was quite the womanizer, gambler, and fighter. He didn’t find much joy in practicing his Catholic faith, it seems.

Instead, he loved the battlefield and his imagination was enraptured by classic tales of knights and ladies.

However, it all came to an end when a cannonball broke his leg.

Here is how St. Ignatius narrates it in his autobiography.

“Ignatius stood fighting bravely until a cannon ball of the enemy broke one of his legs and seriously injured the other. When he fell, the citadel was surrendered. When the French took possession of the town, they showed great admiration for Ignatius. After twelve or fifteen days at Pamplona, where he received the best care from the physicians of the French army, he was carried on a stretcher to Loyola.”

He endured many surgeries and was subsequently forced to stay bedridden for several weeks.

This period of convalescence was exactly what Ignatius needed to let God into his life.

While recuperating, he desired to read more stories of knightly adventures, but there were no such books around. This forced him to read two books that deeply shaped him and transformed him. He read “The Life of Christ,” by Ludolph of Saxony, a monk who lived in the 1300s, and another book called the “Flowers of the Saints.”

Ignatius then began to dream about becoming a saint and decided to live differently, moving away from his former life and embracing a life of the Gospel.

In our own lives, we all need that “cannonball” moment, where we let our old way of doing things be destroyed in order for God to fill us with the “new wine” of his grace. It may not be as dramatic as St. Ignatius’ life, but if we want to find lasting peace and joy, we need to let God root out our bad habits and be transformed more and more by the life of Christ.