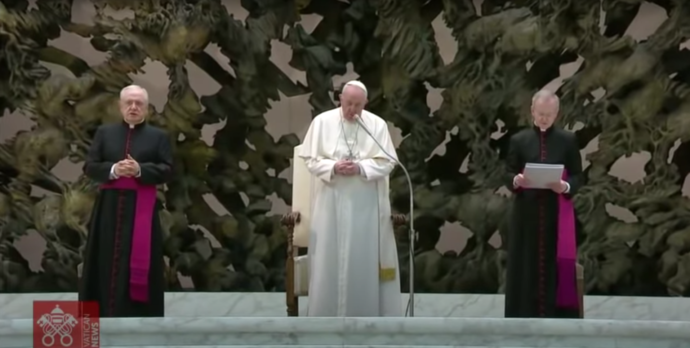 At his most recent general audience, Pope Francis has made a special appeal for prayer for peace, urging the world to pray for Ukraine and dedicate Ash Wednesday as a special day of prayer and fasting.

My heart aches greatly at the worsening situation in Ukraine. Despite the diplomatic efforts of the last few weeks, increasingly alarming scenarios are opening up. Like me, many people all over the world are feeling anguish and concern. Once again the peace of all is threatened by partisan interests. I would like to appeal to those with political responsibility to examine their consciences seriously before God, who is the God of peace and not of war; who is the Father of all, not just of some, who wants us to be brothers and not enemies. I pray that all the parties involved refrain from any action that would cause even more suffering to the people, destabilizing coexistence between nations and bringing international law into disrepute.

And now I would like to appeal to everyone, believers and non-believers alike. Jesus taught us that the diabolical senselessness of violence is answered with God’s weapons, with prayer and fasting. I invite everyone to make next March 2, Ash Wednesday, a Day of Fasting for Peace. I encourage believers in a special way to dedicate themselves intensely to prayer and fasting on that day. May the Queen of Peace preserve the world from the madness of war.

In light of today’s developments in the crisis in Ukraine, we see even more clearly the timeliness of the clear and heartfelt appeal that the Holy Father made yesterday at the conclusion of the General Audience. The Pope spoke of “great sorrow,” “anguish and concern.” He also urged all the parties involved to “refrain from any action that would cause even more suffering to the people, destabilizing coexistence between nations and bringing international law into disrepute.”

This appeal has taken on dramatic urgency following the beginning of Russian military operations in Ukrainian territory. The tragic scenarios that everyone feared are becoming a reality. Yet there is still time for goodwill, there is still room for negotiation, there is still a place for the exercise of a wisdom that can prevent the predominance of partisan interest, safeguard the legitimate aspirations of everyone, and spare the world from the folly and horrors of war.

As believers, we do not lose hope for a glimmer of conscience on the part of those who hold in their hands the fortunes of the world. And we continue to pray and fast — as we shall do this coming Ash Wednesday — for peace in Ukraine and in the entire world.

As the Pope’s Worldwide Prayer Network, let us join together and pray for peace in Ukraine!